WHERE (AND WHAT) TO EAT IN AMSTERDAM

Here are five of my favourite places to eat in Amsterdam. From sweet treats to the best brunches, I have got you covered.

I was (very) pleasantly surprised by Amsterdam. When I first visited over 10 years ago as a naive 18 year-old, I thought Amsterdam was a crazy place. But I’m so glad I returned, because Amsterdam circa 2017 is one of my favourite European cities. From the friendly locals to the architecture to the attractions, I could have walked around the canals forever. As it turns out, Amsterdam is also a great city for foodies.

Most of the locals I met spoke great English. So I felt more comfortable dining out for brunch solo in Amsterdam, compared to other European cities. Thanks to Pinterest (and Beverley from Pack Your Passport), here are my personal favourite places to eat in Amsterdam. I just wanted to let you in on the secrets I wouldn’t have known about if it wasn’t for other bloggers. Because these foodie experiences made my time in Amsterdam.

Here’s my itinerary for three awesome days in Amsterdam

5 places to eat in Amsterdam

Bakers and Roasters is a New Zealand/Brazilian-inspired cafe. When I stepped through the doors, I instantly felt like I was back home in Melbourne. My server was also from New Zealand, so there was definitely no language barrier here. The cafe is a great place to eat in Amsterdam for breakfast and lunch. The menu includes sweets (all cakes are baked in-house), savoury dishes, bowls, salads and sandwiches. I sampled the B&R special, of course. It featured everything I like in a brunch dish: scrambled eggs, bacon and pancakes.

Bakers and Roasters has two locations in Amsterdam. Its little sister is also Los Feliz, which specialises in Mexican food. If only I had more time.

A stroopwafel is a popular Dutch snack. It consists of a layer of caramel, sandwiched between two thinly sliced pieces of baked dough. You will find packets of them in souvenir and grocery stores everywhere, but for the best fresh version head to Albert Cuyp Markt. This was a Pinterest tip that I’m so glad I followed. The stroopwafel was the perfect light and sweet snack. The man making them was also very friendly. Although the market itself wasn’t too exciting, I’d go out of my way for another stroopwafel from here any day.

I probably should have just called this post “my favourite snacks and brunches in Amsterdam.” But day two brunch saw me check out The Breakfast Club, which I found via Google. But let’s be honest, the name had me hooked instantly. The Breakfast Club has locations across Amsterdam as well, but the Wibautstraat location was an easy walk from my hostel.

This is another gem I have to credit to Pinterest, although I can’t remember the exact blog I got the information from. Anyway, Banketbakkerij Van Der Linde is a small ice cream and cake shop I would have totally walked past. Located next door to Primark, it serves only one ice cream flavour — vanilla, for a very cheap price. Although this doesn’t sound that interesting, believe me when I tell you this is the best vanilla ice cream you will ever eat. I don’t know what they do, but it is whipped in a way, and so smooth and creamy. I want one right now just typing about it! There’s no reason not to stop by when exploring Amsterdam.

The final piece to the “best places to eat in Amsterdam” puzzle is The Pancake Bakery. Why yes I did go out for brunch in Amsterdam every day I was there. Hence why I have no dinner recommendations. I kept that meal healthy and cheap. Anywho, The Pancake Bakery was a little bit expensive, but the amount of savoury and sweet pancake options available on the menu was amazing. Plus, they were HUGE. I decided on a sweet option and it was very delicious. The thin pancake base was balanced out by the massive amount of toppings.

A couple of other brunch recommendations I had on my list were Betty Blue and Coffee & Coconuts. Next time, Amsterdam. For dinners, there are stores called Albert Heijn everywhere in Amsterdam, which are stocked with all kinds of pre-made and fresh food. So I went to one most nights and purchased a salad, to offset all of the brunches.

I hope this guide to my personal favourite places to eat in Amsterdam helps you in planning your trip. Because like I said, you should totally plan your day around ice cream and stroopwafels. It will be the best decision you make. Before you go, don’t forget to check out my more comprehensive Amsterdam guide.

If you’re looking for a hostel in Amsterdam, I stayed at Generator. It had its pros and cons, but it’s located within a park and it’s very modern. 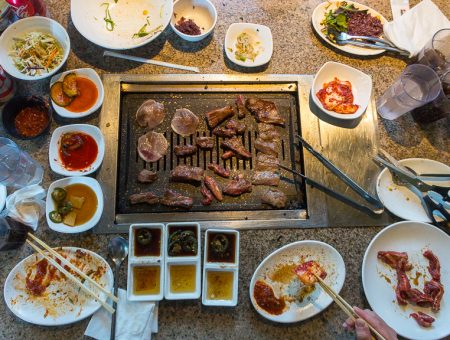 WHERE TO EAT IN LOS ANGELES, CALIFORNIA

Where to Eat and Drink in Hobart, Tasmania

Hello 👋🏻. I'm Hayley, an Australian freelance writer and travel blogger. Welcome to my blog, where you will find plenty of solo travel advice and expert travel tips. Having visited over 40 countries, I hope to inspire you to take the leap and travel this incredible world we live in. read more

Moving on from Bruges and back home to Magnetic Is

© 2020 Hayley on Holiday. All rights reserved.
I love this little corner 🌈 and I suspect more

Moving on from Bruges and back home to Magnetic Is

A final photo from Bruges 🍃. Told you it's pret